Every day for two years, since he came home from China, our son Josiah has come to breakfast with his shirt on backwards. And every morning I point and say “Josiah, please turn your shirt around. Remember, the tag goes in the back.”

A few days ago, he bounced into the kitchen with shirt on backwards as usual. I felt my frustration rising and my patience ebbing. “Josiah, how many times do I have to tell you: THE TAG GOES IN THE BACK!”  With eyes wide (or as wide as they could go) and bounce deflated, he exclaimed “What is TAG? What is TAG?!”  I knew right then that we had a communication problem.

Later, I was relaying this story to Mark, and we had a little giggle. “It reminds me of two things” Mark said, “Marriage and Missionaries!” When I asked him to expound, he pointed out the numerous couples he counsels as a Chaplain and the times when they THINK they are communicating, but in reality they are speaking two different languages – “man-ese” and “woman-ese” (I think he could have used us as a legitimate example but he wisely refrained).

Then he reminded me of when we lived in Zambia as missionaries and were learning the chiMbunda language. For quite a while, when he arrived in a village to teach the bible he would greet everyone and then announce “I have come to teach in your village.” Or at least that’s what he THOUGHT he was saying.  We later learned that he was REALLY saying “I have come to urinate in your village.”  But thankfully the Zambian people are very gracious and they never let on. They would always smile and laugh a little -which confused him, but no one in the villages ever corrected him.  Only later, much later, a dear Zambian brother gently, in a very round-a-bout way, explained the different inflections in the two words and Mark realized the mistake he had been making all along. “Why didn’t you tell me sooner, brother?” Mark asked. After all, this friend often accompanied Mark to the villages. “Aah” he smiled “that would have been unkind. We are happy you are trying and don’t want to discourage you.”
The focus for our Zambian brother was on the relationship, not the precision of Mark’s language skills. But that’s not necessarily the “American” way. As Americans we tend to be more concerned with “getting it right”.
But Mark’s story made me think…maybe I don’t need to point out the backwards shirt every morning. And if I must (like when we are heading to Co-op), then maybe I can just gently show him the tag (with a smile, not a frown) and let him change it without a word. Maybe I can treasure the relationship right now and not worry that he is going to go to college with his clothes on backwards. And if he does, no one will notice because his smile is so bright:) 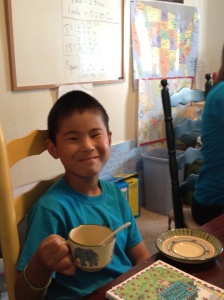