For several weeks, life for us had been busy – crazy busy. SIMGo training for new personnel, skype calls, debrief of cross cultural workers returning from their fields of service, presentations in Minnesota for a Missionary Pastoral Care Conference and then the Global Community of Practice meeting in Philadelphia for Trauma Healing. Finally, several days of training in the Children’s TH program -also in Philadelphia. And then preparing for a five-day  Equipping session in Charlotte and an upcoming trip to Liberia!!! On top of that, the normal family activities: driving people to practices, work, school, doctors and dentist appointments, friends over, church activities, and more. Our plates were spinning.

Then, one night about three weeks ago, we suddenly and dramatically gained a new perspective. I had just settled into a very deep sleep when suddenly the bedroom door burst open and Mark came in yelling for me to come quickly, that something was wrong with Josiah and he would not wake up! I leapt out of bed and stumbled down the hallway in a rush. When I entered the boys room, I found Josiah on the floor having a seizure, his lips blue, making choking sounds with Benjamin kneeling by his head pushing objects out of the way and trying to protect him. I knelt beside him and turned his head to the side and explained to Ben that it was a seizure. “Mom, what should I do?” “Tell Daddy to call 911.” I explained with chattering teeth. (that’s how scared I was). Immediately Mark was on the phone with the 911 operator and he handed it to me. Ben ran to turn on the outside lights. Before I knew it, my sister Stephanie was kneeling by my side. Josiah’s seizure had become less severe but still continued until the ambulance drove up. Quickly, I ran into my bedroom to grab some clothes and found poor Katie sobbing in the dark “He’s dead! He’s dead!”. “No Katie. He had a seizure but he will be ok!”(I was hoping what I said was true).  Rushing past her, I caught a glimpse of Isaac huddled by the bed. In that moment, I realized too late that in our hurry to help Josiah we had failed to explain to the other kids what was happening and reassure them. Later I heard from Grace that she was downstairs and thought Josiah had passed away and was too terrified to come upstairs. She’s the one who called Aunt Stephanie.

Anyway, in the ambulance ride to the hospital, Josiah woke up, looked around, asked what happened, then went back to sleep. He was the least traumatized of all of us! Mark and I drove him home from the Children’s hospital ER several hours later with no answers but a ton of questions. 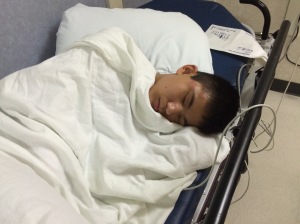 I remember a few things very vividly. One of them is that my brain felt like jello!  I could barely remember my address to tell the 911 operator. It also seemed to take forever to find my wallet with my insurance card and credit card to take with me!

I also remember that as I ran to get into the ambulance (only one of us could ride along), Mark grabbed my hand and squeezed. I looked up at him, and he said with tears “O God, I love my son!” And as I climbed into the back of that van, I was thinking the same thing -how much I love this boy, in every way our son.

For those of you who have never adopted, you may not quite understand how much that moment meant to us. But it brought home so clearly to me that in every way Josiah is our son. And we love him. He did not come to us until he was seven. And he is from another country far away, not even the same ethnicity as we are. And yet my heart hurt the very same that night as if it had been Grace, Katie, Benjamin or Isaac.

We still have lots more tests to do before we can find out what caused that terrible seizure. It lasted almost ten minutes, and he hit his head pretty badly on the bedside table on the way down. These days we sleep with a baby monitor in our bedroom just because we are nervous it might happen again.  But it did put some things into perspective and forced us to make some good changes.

I won’t share all of them here. But I DID cancel that trip to Liberia in May. And the great thing is that God put together an AMAZING team of Trauma Healing facilitators who are able to lead that training without me.

For the next few months, I will be staying put here at home and working on the US military contextualization of the Trauma Healing material.  Mark will continue to do debriefs here. He is also making a short trip to South Africa next week to meet with some SIM country Directors to help them think through how to develop pastoral care on their fields.

These are just a few of the positive changes we have made. Others are more internal, as we slow our family down, our selves down, and take care of the things that really matter in our souls and in our relationships.

Thank you for praying for us in the coming months! We will keep you updated as we know more.

One thought on “Perspective”